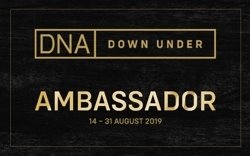 Has 2019 been disappearing very quickly for you too?

I confess I can’t believe that one third of the year is just about gone already.

I’m absolutely thrilled that I’ll be at the Melbourne 1-day event on Friday 23rd August and the Sydney 3-day event Thursday 29 – Saturday 31 August.

Early Bird discount bookings close on Tuesday 30 April so if you want to benefit from them you need to book NOW.

Blaine Bettinger is considered one of the world gurus on DNA and this will be such a great opportunity to benefit from his incredible knowledge.

I’ve also be fortunate to have heard some of the other speakers on the Sydney program – Helen Smith, Kerry Farmer, and Louise Coakley.  Our local Geelong Family History Group has been spoilt with TWO webinars by Louise Coakley and Heather Cox so I know I’m going to have a dilemma deciding on which sessions to go to – I just know that I won’t be disappointed whichever ones I choose.

Do I sound excited?  You bet I am.  I’ve been chatting to Blaine via Messenger since his participation was announced and he is so looking forward to bringing his two boys to Australia with him.  I’m also excited because DNA Downunder falls in our Australasian National Family History Month so August is going to be full-on for me!

By attending the Melbourne AND Sydney DNA Downunder events that means I’m doing DNA TO THE MAX!

You have a choice of:

As I said, I was excited when DNA Downunder was first announced and I was delighted when I was invited to be a DNA Downunder Ambassador.

The first third of the year has whizzed by and I KNOW the second third will disappear even quicker – by then we’ll all be talking about how much we’ve learnt about DNA testing and using those results to the MAX!  I can’t wait for #DNADU .